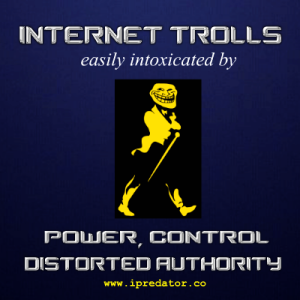 Many times on the internet you’ll find the master troller. This is someone who’s always looking for a good argument and usually they are there to piss you off. You’ll meet a lot of these people on Yahoo Answers and YouTube. You know they are the person who’s always commenting on everyone’s comments and making it seem like you’re the idiot.

I recently met one right here on WordPress. He’s a man who felt I was being ignorant and babbling about the Transgender conflict blog. Imagine that, someone comes onto your blog and calls you ignorant. Well, that’s the world today. My faithful blog readers know that I’m always saying exactly how I feel. There’s nothing wrong with anyone saying how they feel, it’s your thoughts and you’re entitled to them. Sure, you’re always going to strike a chord with someone and everyone won’t be happy with what you write but, nevertheless, you shouldn’t change how you feel to make everyone else happy.

Trolls can come in all forms, they are the one’s who write stupid and outrageous comments just for the heck of it. For instance, on Yahoo Answers I saw a question that said “Is it legal to name your child McNugget?”. It’s trolling post like these that will often spark laughter and entertainment. Then you have trolls that enjoy seeing you live in misery. They will make comments to try and push you into anger. These are the kind of people who have nothing better to do and their life sucks more than anyone else’s in the world.

No matter what kind of trolls you meet, you have to maintain your composure. It’s more difficult if you don’t have your own emotions under control and you may lash out in anger and some people lose their shit so bad they actually start making legit threats towards the troll. These are things that you absolutely can’t do. The person on the other end is never worth it.

There are many people who marry someone without even considering what their in-laws will be like. I think that many people are in good favor with the in-laws in the beginning but, after the marriage has been going for a while, things start to go south. In my case, my in-laws hate me. You see, I’m not the same race as my husband and in his culture they have very strict beliefs on what a wife should be like. In this case, women are sex objects and they are also home-makers and nothing more. The women are supposed to obey what the man says and tolerate anything that happens, even if the man is abusive.

On the other hand, I was raised differently. It was not optional for a woman to work because, it took both incomes in order to pay all of the bills and have entertainment money as well such as going on vacation at least twice a year. The woman was not slave to the man. The man did his own laundry, cooking and never treated the woman as if she owed him anything. Due to this difference in cultures, my in-laws have decided that I’m an evil, outspoken witch. In fact, my mother in law truly believes that I’m the spawn of Satan because, I’m not a submissive wife who doesn’t defend myself.

Though everyone’s situation with their in-laws are different, the wife is usually subject to more stress from the husband’s family than vice-versa. This can often cause problems in the marriage and eventually, the man either has to choose between his wife or his family or, the wife decides she’s not willing to tolerate it any more and just leaves. It’s unclear why things are so bad between in-laws and married couples. In my experiences, the differences of opinion on everything, the difference in cultures and the way each of the people involved were raised has a lot to do with the conflicts. Almost always, the mother in law rejects her daughter in law because, she feels as though the daughter in law will never be worthy of her “Perfect son”.

Then, as the couple goes on to have children, often times the mother in law steps in and tries to tell her son or daughter what to do with their child and why their spouse is doing it all wrong. I’ve even heard of nightmare in-laws where they obtain a key to their child’s house and they go in whenever they want, rearrange things in the house and tell them what to do with their life and why it’s all screwed up. You rarely hear of this problem with father in laws and I assume it’s because, they are happy that their child grew up enough to move out, get married and give them grandchildren and almost always, the father in law is happy to just be free from raising children. However, the father in law always has the tough job of playing referee when the mother in law gets involved in things she shouldn’t.

For those who are experiencing problems with their in-laws, please leave a comment at the bottom of this blog and let me know what your experience has been and what you think of the above statements.

I want all of you to know that I’m not writing this blog due to the domestic abuse that has occurred within the NFL. Now with that being said, let’s proceed.

Domestic violence can often occur with someone that you trust and often times it’s due to that person’s inability to control their emotions. It can however, be caused by someone who has a mental illness such as Paranoia which can cause the person to believe that their partner is doing things intentionally to make them angry. The other side of it can also be the person’s inability to take personal responsibility for their own actions. Often times the abuser will say “If you hadn’t of said that, this wouldn’t be happening” or whatever the case is.

I want you to know a few things. In the first place, I’m a survivor of domestic violence. I won’t bore you with the details but, I will tell you that the person who abused me did so for as long as he could get away it and first chose isolation to keep me from telling anyone and then proceeded with the endless cycle of breaking my spirit to make me submissive. You see these are all common steps of the abuser and most abusers are afraid for anyone to discover what they are doing.

The most difficult thing for women to do is to leave their abuser. It’s common that people will criticize and say “Why didn’t you leave sooner” well, as I stated before Isolation is the abusers biggest advantage. There are extreme cases where the abuser will literally force you to stay inside the house. The person may block the doors/windows, they may tie you up or even lock you in a closet. There’s no way to escape most of the time unless someone gets worried about you and comes to your rescue.

The biggest thing that you need to know, if you do manage to get away from your abuser know that it will not stop. Almost always, the abuser is determined to have you back under their control and that is when stalking begins. You will often find that person showing up where you happen to be, usually they have either followed you or they have someone giving them information about where you’re going or who you will be with. Always take someone you trust with you every place that you go. I know that this may be annoying or even inconvenient but, it will also likely save your life. If you have no one to go with you, put it off for another time or carry discreet pepper spray or a tazer.

There are various resources that can help you escape from this abusive endless cycle but, what you need to know for sure is that you will require counseling when you leave the abusive relationship and things will never be the same again. That’s bad news you say, yes, the good news is though, you won’t be being beaten every day any more. It’s impossible to say whether or not the person will follow you everywhere you go but what they will do is, they will do everything they can to convince you to either stay or return back with them. They may even say “I went to therapy” or “I’m on medication now”. I do believe that people can change, I don’t however believe that they can change so quickly and by you going back to them, you’re rekindling that excitement they had of controlling and abusing you. It’s never a good idea to return based on what they claim, or even return at all.