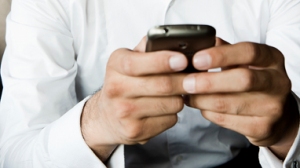 With all of the new technologies now and most of them being consolidated onto cell phones, we have become a generation of looking down. I can clearly remember being a kid and going somewhere like the doctors office and running to my room before we left, I had to grab something to keep me busy which ended up being either a coloring book with crayons, a toy or a handheld video game system like my Nintendo Gameboy. Ah those were the days. Now we have a generation of people who carry their smartphones and can do anything they want to keep their self busy.

The older generations who don’t use technology will tell you that our generation is missing out on so much in life. What are we really missing out on though? Not much actually if you think about it because, everything is available to us. What our friends are doing, what news is on TV, what new game is out that everyone is playing, controlling our home alarm system and many other things that can be done on a smartphone. We can even travel the world through Google earth. The great smartphone even gets us out of a boring situation, by having something to distract us. Yes we truly are the generation of looking down.

What did people used to do for entertainment before cell phones became smart? Well, many people spent much more time outside, kids rode their bikes and played a good game of hide and seek or basketball. People had to go home or to a friend’s house to play on a bulky video game system, you had to pull out a camera to take pictures and then have them developed at a store. If you wanted to see what the other side of the world was doing, you would have to spend thousands to travel.

There’s no doubt about it, we all have our heads buried in our smartphones and most of us have our phone’s glued to our hands everywhere we walk. We’ve become so obsessed with our phones we rarely put them in our pockets anymore or leave them laying somewhere and wall hugging to keep that cell phone charged is a way of life.

It’s so important to us as a generation to be liked online. We want the whole world to see our tweets, instagram posts, Facebook statuses, what we’re eating, where we are going, what we are doing and for people to press that like button, reblog, retweet, sharing, commenting and so on. We determine our self worth by what other people, even strangers think of us and some people take it much harder than others.

If anyone here doesn’t have a smartphone, would you own one and if not, why?

For those of you who do have smartphones, would you ever live without it?

There are many people who marry someone without even considering what their in-laws will be like. I think that many people are in good favor with the in-laws in the beginning but, after the marriage has been going for a while, things start to go south. In my case, my in-laws hate me. You see, I’m not the same race as my husband and in his culture they have very strict beliefs on what a wife should be like. In this case, women are sex objects and they are also home-makers and nothing more. The women are supposed to obey what the man says and tolerate anything that happens, even if the man is abusive.

On the other hand, I was raised differently. It was not optional for a woman to work because, it took both incomes in order to pay all of the bills and have entertainment money as well such as going on vacation at least twice a year. The woman was not slave to the man. The man did his own laundry, cooking and never treated the woman as if she owed him anything. Due to this difference in cultures, my in-laws have decided that I’m an evil, outspoken witch. In fact, my mother in law truly believes that I’m the spawn of Satan because, I’m not a submissive wife who doesn’t defend myself.

Though everyone’s situation with their in-laws are different, the wife is usually subject to more stress from the husband’s family than vice-versa. This can often cause problems in the marriage and eventually, the man either has to choose between his wife or his family or, the wife decides she’s not willing to tolerate it any more and just leaves. It’s unclear why things are so bad between in-laws and married couples. In my experiences, the differences of opinion on everything, the difference in cultures and the way each of the people involved were raised has a lot to do with the conflicts. Almost always, the mother in law rejects her daughter in law because, she feels as though the daughter in law will never be worthy of her “Perfect son”.

Then, as the couple goes on to have children, often times the mother in law steps in and tries to tell her son or daughter what to do with their child and why their spouse is doing it all wrong. I’ve even heard of nightmare in-laws where they obtain a key to their child’s house and they go in whenever they want, rearrange things in the house and tell them what to do with their life and why it’s all screwed up. You rarely hear of this problem with father in laws and I assume it’s because, they are happy that their child grew up enough to move out, get married and give them grandchildren and almost always, the father in law is happy to just be free from raising children. However, the father in law always has the tough job of playing referee when the mother in law gets involved in things she shouldn’t.

For those who are experiencing problems with their in-laws, please leave a comment at the bottom of this blog and let me know what your experience has been and what you think of the above statements.

As a person who has lived most of my adult life as a co-dependent, I must say that it’s one of the most difficult things a person can go through. For myself, being co-dependent can be frustrating because, there’s a constant need for having someone around even if you don’t need their help.

Most co-dependent people are often seen as unable to do anything for their selves. However, this was not the case with me. In my life, I was co-dependent in a way that I felt the need to have bad friends and bad relationships. This is not because I enjoy negativity but, it’s more to do with wanting anyone in my life and around me so that I wasn’t alone but, I needed nothing from them.

The second type of co-dependency is a person who truly cannot function without depending on someone else. This is not just financial but also mentally, physically, sexually and spiritually. There comes a point where the person cannot be alone, cannot preform tasks without someone there to tell them they are doing it right, they constantly feel the need to talk to someone about everything and their lives are diminished.

Recently, I did something I have never done and that is to remove bad people from my life. The reason this was done is because I’m no longer needing to depend on someone else to make me happy. I’m in a good marriage and I have only 2 good friends and I’m okay with that. Letting go when you are co-dependent is extremely hard to do. For me, it took many years and I had to just do it. I know that sounds crazy to a co-dependent person but, sometimes “cold turkey” is the best way to go.

If you’re in a co-dependent relationship, keep in mind that some partners play off of that and enjoy knowing that they can do anything and everything they want and you won’t leave because, you don’t want to be alone. This is very common in semi-abusive and full-abusive relationships. If you have a loving partner, you will find it harder to do much of anything when your partner is not around and thus will develop “Separation Anxiety Disorder” and yes I know what you’re thinking “Only kids and animals go through that”, that’s a myth, there are many adults who can also suffer from S.A.D.

You may also find that in a co-dependent friendship that you’re giving more than you’re getting. It’s often the case that people often “over do it” when it comes to pleasing the other person and no I’m not talking about sexual. In this case, I’m referring to the acts like being a “Yes man” and saying yes to everything they want you to do because, you fear losing the friendship if you don’t. Keep in mind: A real friend will not abandon the friendship if you abandon the codependency.