So recently my son who has autism has become obsessed with balloons. Now, I know that toddlers can have favorite toys and they enjoy playing with certain things but, this has gotten out of control. Let me explain.

We were out shopping as we normally do on July 1st and it’s a day that we all look forward to. Normally, we’ll go into the store and our son enjoys running around, riding in the shopping cart and just enjoys being out. He has never begged for anything or cried for anything with the exception that he does like bouncy balls. We always bought him one because, he would often pop his by throwing it in our rose bushes. On July 1st, we went into the store and balloons that were on the ceiling caught his eye and he started exclaiming “guka, guka” and we didn’t know what that meant. He kept reaching for the balloons so we assume that word means something to him and that was his word for balloon.

As we continued on through the store we noticed that he was starting to get much more fussy than usual and he started screaming at the top his lungs begging for the balloon. This was not typical of his behavior and he even started kicking me which he never does. Everyone in the store was staring at him and meanwhile we’re baffled as to what just happened. We pulled a balloon down just so we could get through the store. He was smiling, laughing and saying “Guka” over and over and began hugging the balloon. We tried taking it away and getting him to say bye bye to the balloon in the store and things got much worse so we caved and bought the $1 balloon. We didn’t realize that wouldn’t be the end of it.

We went back to the store a few days later, a different one this time and again he begged for a balloon even though he still had his at home. We managed to get his mind off of it by basically shoving a bag of candy in his eye sight and quickly opening the bag and of course that worked at the time. I know it’s not the best option but, it’s the only one we had.

Yesterday, my husband took our son into a store and he saw a balloon at the register. My husband was trying to get out of there as quickly as possible before the tantrum started but, the cashier was too slow and there were too many people in front of him. So, the screaming began and of course people were staring. Our son went into a huge meltdown and I’m not talking about like your typical toddler tantrum, he actually went into a full blown violent rage. So again, my husband gave in and my son came home with a bright red, star shaped balloon.

I’m just not sure what to do about this obsession, I know that it’s only been a little over a week but,  I know my son and I’m worried about where this obsession will take him. Will he be completely obsessed with balloons for a long time, what happens when he accidentally lets go of a balloon and it goes higher than we can catch it? We had thought about taking a balloon with us tied around his wrist so that we don’t have to keep buying them. Has anyone else gone through an obsession with balloons or other objects that caused nightmare tantrums? 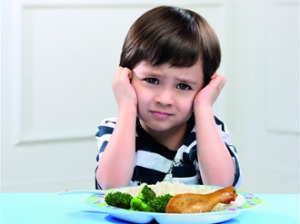 This is not my child but, that’s the face he gives me when I put food in front of him that he doesn’t like. PHOTO CREDIT: http://www.shoppinglifestyle.com

So I have a son who’s 2 years old and has autism. He’s never been a great eater but, I have noticed that he’s getting more picky. It seems that he has a problem with foods that are of funny texture. I’ve heard that many Autistic kids go through this and I’m wondering how many other parents out there went through this?

In the first place, he will not eat any kind of sauces and that includes Mayo, Ketchup, Mustard, Ranch, BBQ or any other sauce. He will not touch multi-colored foods like vegetables (especially not the mixed one’s). He’s highly allergic to fruits so he doesn’t know what they taste like. He will eat anything chicken but, not much else. He’ll eat French Fries and Potatoes (whether whole or chopped) and he’ll eat beef tips but will not eat bread or hamburgers.

It’s become so bad the doctor has put him on PediaSure because he’s not getting the nutrition he needs from foods even though he’s above average for the guideline for weight. He is not mal-nourished by any means, he’s very healthy it’s just that the doctor is concerned about him losing weight in the future or not getting enough vitamins. We did have him on gummy vitamins but, they apparently were not giving him the right amount of nutrition or at least the doctor could not tell a difference.

If your child is going through this, it’s so important to talk to your pediatrician about it because, they may need testing to see if they have digestive issues or other sensitivities not related to the Autism. For our son, he was born nearly a month early because I had a placental abruption and had to have an emergency c-section and he was born at right at 6 pounds but, could not breathe at birth due to consuming blood and pieces of the placenta. He was in the NICU for 3 days and we stayed in the hospital an additional 2 days.  After we brought him home, he had colic really bad and that actually continued until he was 6 months old and he also had acid reflux so he was on a special formula. It took a long time to get him well and now he’s struggling to eat again. I’m not sure if he’s just not interested in the foods and he is going through both the picky eater stage that happens with 2 year old’s or it’s the Autism.

If anyone else has gone through this with their Autistic child or your 2 year old please comment on this blog and tell me the story and what if anything helped your child.

So my son who’s 2 1/2 years old now is starting to speak somewhat. He can say Taco, Eat, Juice, Mama, Daddy, Bye Bye, Cat and his name. So, we’re encouraging him to keep saying those words and trying not to add too many new words. He babbles so much that we know he knows what he’s talking about, no one else understands him though most of the time, including us.

He’s still in Early Intervention but, they don’t seem to work with him like I thought they would. They aren’t encouraging him to talk or learn new skills. The woman who comes is mostly silent other than trying to get him to learn sign language. I’m concerned about whether or not this is good for him. I don’t mind if he learns sign language, I’m just not thrilled about the little progress being made by these people. They really seem to slack off and the woman seems to not care about her job anymore.

I’ve decided to join many Autistic mom groups, I’m hoping that through there I can receive better support and understand of my son’s condition. We’re still struggling with his OCD’s. He has a fascination with turning lights on and off a certain number of times, watching the same cartoons over and over, right now he’s in the Thomas The Train phase and Bob Zoom (an obnoxious cartoon filled with Spanish kids songs). My son understands much more Spanish than English and so it’s something we’re working on.

I can see that it’s getting harder and more frustrating to get his attention. He’s your typical 2 year old cute ball of terror and with the lack of language skills and showing little interest in other kids or productive activities, I’m at a loss on what to do. I know and understand that kids like same, same, same every single day but, his need for the same thing constantly isn’t working around what we need to get done. He likes going out for no more than 10 minutes which makes it complicated for me to go to the store, to the post office or any other adult thing that must be done. If anyone here can give me some advice I would greatly appreciate it!