So today I’m going to review Charter Communications on both internet and TV.

I’ve had Charter as my internet provider for a year and TV for a month. Like many people, I’m not crazy about Charter and as a matter of fact, if I had other options I would take them. I’ve had nothing but trouble on the internet side. Paying an astounding $44.99 a month for “high speed” internet. Now, I put high speed in quotation marks because well, they just don’t match up with the speeds they claim you’ll receive. I feel that their prices are ridiculous compared to what you actually get. Also, I’ve had to have a technician and a supervisor technician come out more than 20 times in the past year to repair all sorts of problems. There’s constant outages, the internet will just turn off and you have to reconnect, sometimes it just doesn’t work at all for a day or two and it’s just always something wrong.

The TV portion. Expensive, Expensive, Expensive! The prices are absolutely ridiculous for basic TV. I could get way more channels for a much lower price if I went for satellite verses Charter. Charter knows they don’t have good prices and they could care less! They only reason they sucker people like me in is because they don’t have any contracts and you can cancel your service any time. Oh and be prepared to be billed for 2 months at once every month on the TV service. When I signed up, I was told that I would have a prorated amount to pay on my next bill. Exactly one week later, to my surprise I had the prorated amount plus a months worth of internet and a months worth of TV which brought it to a ridiculous $135 and it had to be paid within 3 weeks. Are you kidding me? Is that how they love to scam people? Oh and by the way, after the first year (even though there’s no contracts), you’ll expect to pay $118 for internet and TV combined every month and you’re also penalized for having wifi so they charge extra if you want to keep your wifi (Imagine something that’s been around a long time, is free in many different hotspots and yet you have to pay extra for wifi) and you’ll have to pay for the router and each cable box. The price just goes up and up, being charged for everything under the sun.

The customer service: HORRIBLE! Most of the employees are real jerks there. They don’t want to hear you out, they don’t want to help you out and if you’re unhappy their response is “Well, you’re not under contract, you can always cancel and go to another company”. As if that’s some sort of threat. I would love to go to any one of their competitors. I know that I would get better customer service, better pricing and better product. So in closing, if you can avoid Charter, do so!

I believe it’s important to address the stigma of those on Welfare, Food Stamps and any other form of help for needy families. I’ve seen too many discussions, arguments, memes and they were all negative and clearly had the wrong views. Let me set it straight for you.

Medicaid – The insurance that’s required for those who either don’t have work or can’t afford insurance on their own. It’s critical for families who are struggling because, medicaid provides necessary healthcare of children and adults alike including medications which couldn’t otherwise be afforded.

Food Stamps – Given to those who are under the poverty line at around 130% below the line. These food stamps are not just given to anyone, they are given to people who not only meet the poverty guideline but, they are also given to people who do work and aren’t making enough money. Everything is included when being eligible for food stamps including the amount of rent and utilities you pay, allowances for phone, child support and many other expenses

Cash Assistance – A set amount of money based on how much you make and some of the expenses you have to pay out but only, rent and utilities. Nothing else is included in that when it comes to your requirements. It’s not a large amount of money like most people think.

The main reason that we’re talking about this today is because there’s so many people out there who receive a bad stigma for being on welfare of any kind and they are often bashed for it. Not everyone who’s on assistance is on drugs or selling their food stamps. Not everyone who’s on assistance doesn’t pay their taxes or hasn’t ever paid taxes, not everyone can find work even with previous experience or an education. Not much of your tax dollars go to funding these programs, as a matter of fact more of your tax dollars go to funding the military expenses, like creating robots to fight in senseless wars.

You see, people are quick to say “Why don’t you go get a job and pay taxes like everyone else”. That being said, you’re assuming that they aren’t working now and that they have never paid taxes and you’re also not doing your research on how little of tax dollars actually go to the programs. You automatically assume that you’re supporting someone else’s family who you claim is on drugs, lazy and looking for handouts. Do you realize the number of people who can only find part time work, were let go from their jobs so the jobs could be shipped overseas, went through a horrible divorce and were left with nothing, became disabled and are waiting in the 2-3 year waiting list to receive disability benefits? No, you’re not considering any of those things or you wouldn’t post ignorant comments and memes talking about people you know nothing about! 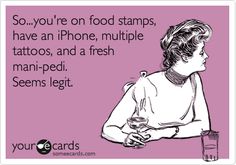 I decided to write a list of things that annoy me. These are my own individual annoyances and not everyone will agree with them so here we go.

#2 – People who use their advantages to snob others. Example: Someone who is much better off than someone else putting on a smile but you know it’s fake. You know that inside they believe they are better because, they have more.

#3 – People who are loud in public. Example: Every single time I go to a store like Walmart for instance, there’s always someone in the store or in the parking lot who is yelling and making all kinds of noise. Seriously? I’m not talking about kids, we’ll get to that later but I am talking about, adults who cannot seem to control their self in public.

#4 – Random strangers who try to parent your kids. Example: I was in the grocery store a few months ago and I have a toddler who has Autism. I know and everyone who knows him knows, he cannot control himself or his emotions and it has nothing to do with my parenting or lack of. My son is making all kinds of noise and he’s being loud about it. He has two things working against him, he’s a toddler and he’s autistic. So anyway, this woman turns around at me and she says “If you cannot control your kid, perhaps you should consider giving him up for adoption instead of disturbing the rest of us”. I became quite angry and I said “Lady, you should probably mind your own business before I end up in handcuffs and you end up in the morgue. My son has Autism and he cannot control his behavior and neither can I”. She became quite angry but, walked away and said nothing else.

#5 – People who judge my husband simply because he’s Hispanic. Example: I have had multiple people say that he needs to go back to Mexico and he needs to stop depleting the system and he needs to take himself and all of his Mexican friends back with him. That sets me off really fast because for one thing, My husband has never lived in Mexico, he’s not from Mexico, he doesn’t speak with a Spanish accent and he’s the most American Mexican you could ever meet. I absolutely cannot stand when Gringo’s (white people) who have a racist attitude towards Mexican’s open their mouth because it’s nothing but ignorance coming out.

#6 – Speaking of Mexican’s, I hate it when people assume that Mexican’s are here illegally and don’t deserve to be in this country and that they should all speak English claiming it’s the “Official Language of the United States”. First of all, Many of the states now known as the United States were owned, created and taken care of by Mexican’s long before people from England who brought English with them came to the United States. There’s a little thing called the Mexican American war in which many Mexican’s lost their land and were bordered off into the remainder of Mexico. Despite what history books say, Christopher Columbus was not the 1st to discover the United States. The Native American’s who spoke many different dialects of their languages primarily Navajo and Kituwah, did not know any English as people from England had not arrived yet. Mexican’s spoke their native language Spanish long before English came along. There’s too much ignorance going on to even comprehend. So many people are hyped up claiming it’s “Their country” and “English is the only language”. That’s absolutely insane. The people “immigrants” from England who finally came over much later and brought English with them did not bother to learn Spanish, Navajo or any other language that was being spoken. They came in, took over and claimed the land for their self. Is that fair?

#7 – Assuming that all people who are on Food Stamps or Welfare are lazy, low life, drug users. Wrong. That’s another of the biggest form of ignorance there could be. First off, close to 75% of people on any of the government programs including Food Stamps have worked many hours in their lifetime and have paid their taxes which go to these programs. The majority remainder of those folks are people who are disabled or retired. A tiny percentage of those people are depleting the system and are lazy, low life drug users. Grouping that small percentage as being a whole group is just plain ignorant.

#9 – People who write vague Facebook statuses. Example: I can’t believe this happened to me. Then of course you have the “Friends” who say things like “Is everything okay?”, “PM Me”. That’s incredibly annoying and shows that they only want attention.

#10 – People who throw everything they have ever done for you in your face. Most people know someone like this. Usually, you have someone who say you borrow $20 from and regardless of whether you pay them back or not, you will never hear the end of all of the things they have done for you. Sometimes, people can remember the entire time that they have known you and likely have a large notebook filled with dates, times and what they did for you. There’s no purpose in this, people like that are simply arrogant assholes who choose to be in control at all times. Those are the people that you would rather chew your arm off than to ask for help from.