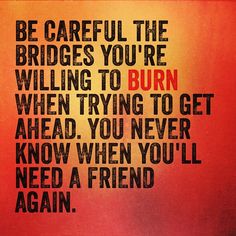 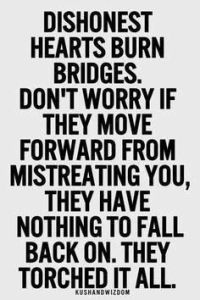 In this blog I’m going to discuss bad associates and people who burn bridges, so that all of you can know what to look for.

There are many different types of friends in this world, let’s look at a few:

I’m going to focus this blog on Bridge Burners because, I recently with through this with someone. I had a so called friend who was focused on “helping me” to get on my feet and had the agenda of getting me to sign up for her business. Now, that was all great for the first I don’t know 3 weeks. I kept my distance for the most part and let it play out. In the beginning I felt happy, later on I realized that this was no friendship and shortly thereafter, the true colors were shown. A bridge burner is someone who appears helpless or to need your help and basically fish for information and then burn their bridges with you. They will often turn on you at the drop of a hat, become cocky or rude and then flaunt all of their new learned information. They often take on the appearance of someone who’s well maintained and in somewhat control.

People who burn their bridges, often do not realize the impact or consequences of doing so and tend to repeat such action with every new person they meet. It’s almost like an endless cycle that will not stop until that person realizes that what they are doing, isn’t the answer. After so long, the person will understand that they have lost something that could have been potentially life changing for them. There are people like myself who refuses to follow up with someone that I’m done with. Other will people give many chances and though I believe in second chances, that has conditions. In my case, the person I’m referring to decided this was a funny matter and straight up said that they will say whatever they want to. That’s when you can tell that the person is enjoying being in control of the situation. The difference is, many people like myself, enjoy knowing that person not only isn’t in control but, that their time of fun and happiness will come to an end.

Now, there’s several things you must watch out for so that you can identify a bridge burner almost immediately.

The above describes in detail the different ways to know if someone is going to be a bad associate or a bridge burner within the first month or so of associating with them. You must be extremely cautious around someone who starts to show the signs and make sure that you haven’t or don’t tell them much of anything about yourself, that you know is bad to get out. A bad associate or bridge burner will make sure they spread rumors about you or tell everything they know. They will become manipulative and hateful. For example, in my case the person was being unprofessional, rude, mocking, vengeful and had periods of bipolar moments and also making “joking” threats. Such as “I would love to slap you right now”. It’s the kind of person you cannot be exposed to for long periods. That usually is a clear indication that not only will they not be supportive of you but, they may turn into someone who becomes a legal problem to you and your family as well. The important thing is that you rid yourself of toxic people as quickly as possible!

I recently read comments from a man who believed that he was the king of his castle and that a woman’s sole purpose was to serve him. I found this quite odd as he insisted that his woman would not work and she would obey him. To me, this is controlling and abusive. Have you ever met anyone who was like this? It’s quite an old fashion way of thinking and on top of that it’s really obnoxious. Even more odd, he claims that the woman is satisfied doing this for him, though I doubt very seriously she’s happy.

Women don’t have a “sole purpose” as every woman is different and women can do anything a man can do and should be allowed the opportunity. After all, we’re not living in a world where women don’t have rights. I’m not saying this because I’m a woman, I’m saying this because it seems odd. Some men act as though they cannot do anything for their self and probably could not wash their own clothes if that woman was gone. So for me, I find these pigest men to be ignorant if anything, as they cannot do much of anything for their self. I could however understand if this man lived or lives in a country where it’s common to put all the work off on the woman. This man however is a white american and that makes him seem abusive.

This man also stated that it’s not his responsibility to care for his biological kids physically, only financially. I’m sorry but, this is what’s wrong with kids today and why some kids are better off without their fathers. I’m sure there are plenty of men in the world who would love to be good fathers and role model’s to these kids that are apparently unwanted. I honestly don’t see how these men are given children by God. That’s an entire different story though and I will try not to get side tracked.

I have seen multiple men who are abusive on TV and even in public. As a matter of fact, I was at a park last week and I noticed that a woman was standing at the car of her apparent ex and then I noticed they had two kids and were meeting to switch custody for the weekend. What caught my eye was the man cursing and threatening the woman and her son. He was making a complete fool of himself and I was very worried about the child’s safety and her’s. He was telling her how useless she was and was threatening to hit the kid in the head. I thought “Yes buddy, hit either of them and I will take you out”. I honestly see no purpose in being so abusive towards the mother of your child and certainly not the kids. I also thought “Why is this woman not filing for emergency custody and then full custody”. I would not let my child go with that man even if he had court ordered visitation and when he called the cops, I would have him arrested for making threats and then he definitely wouldn’t be seeing my kids any time soon.

So the big question is, what causes some men to think they are inferior to women and what causes these reactions towards them? What makes a man think that a woman is only good for housekeeping and sex? I think that whether a man works or not, he should still be responsible for half of all the work at home. Having a job doesn’t stop so many good men from helping their wives. It’s both responsibility and this man was actually trying to quote scripture claiming that God made women for housekeeping and sex. I wrote to him “Even the devil can quote scripture”. I’m sorry but, I have a serious problem with men who abuse and control their women and then use God as their reason for doing it. People like the man on the internet and the one at the park, deserve to die a lonely death.

Have you ever met anyone like the 2 men I have described? Please tell me your thoughts in the comments below! Thanks for reading!