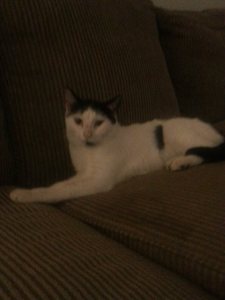 Recently, I got a cat that’s an adult from a married couple who could no longer keep him. We had to drive quite a ways to pick him up and he had never been in a car before. We realized trying to bring him home that it was going to be a tough ride because he was not at all happy about being in a car. Finally about 30 minutes into the ride he started settling down. He lived in a very small apartment and was allowed to be outside roaming the parking lot any time he wanted to. He had never had any immunizations, seen a vet or been neutered. We brought him home to a house nearly 5 times bigger than the apartment he lived in and the first thing he did was run and hide behind the couch. I had known that he probably would do that because I have had cats before. We finally managed to get him out from behind the couch, I put a soft fleece blanket over an extra pillow that we have and laid it on the floor. He wanted nothing to do with the pillow and decided to sleep on our bed the entire night. The next day he laid around the entire day and decided to lay in a torn up trash bag in our closet with only his head sticking out. We left him alone assuming that he would come out eventually. Later that night he began meowing at the door and scratching at the door. He wanted to go outside just like he was used to doing and of course we couldn’t just let him out because he doesn’t know how to find his way home and we don’t have any tags for him yet or even a collar.

So the next day, we took him outside in our backyard which has a large wooden fence all the way around and we watched him carefully. At one point he ran under my legs and jumped all the way on top of the fence and was getting ready to jump over it when I grabbed him. We knew that we couldn’t just let him outside. Most of the time he just lays around or stares out the window but, sometimes he comes around being all annoying and wanting constant attention which I can’t give him constant attention because I have a toddler in the house who has autism and he needs much more attention. I would imagine that some of you will judge me and say that I shouldn’t have gotten a cat to begin with but, I really wanted my son to have a small animal that he could grow up with and maybe even help some of his autism characteristics and I have heard that cats can be very loving and gentle with kids and people who are sad.

Tonight has been the most unusual night of them all. He got up on our bed and squatted over my husbands blanket, was trembling very badly and jumped off the bed and he left behind a small wet spot that didn’t seem like urine. So now I find out that he’s “in heat” and I know male cats don’t go in heat but you know what I’m saying. So now we need to take him and get his shots and get him neutered. He’s also been jumping up on the toilet in our bathroom and jumping up on the tiny windowsill in our bathroom and falling to the floor. I’m not sure if he actually knows there’s a female cat outside or if he’s just hoping there is. Either way, I probably should have looked for a cat that’s already been neutered rather than just asking for any cat.

If you have cats, especially rescued cats you will probably understand all of these frustrations that we’re having right now adjusting to life with a new cat. If you don’t have cats but you’re considering getting one, get one that’s neutered or spayed already.