I left my desktop computer on as I normally do while my husband, son and I went out for a morning of shopping. When I returned home, I didn’t get on the computer right away. Tonight, when I got on the computer I noticed that Google Chrome was missing off of my desktop and that a browser called “BoBrowser” was installed in it’s place. It mimics Google Chrome in that it uses a similar icon and makes you think that you’re going to legit websites.

If you see any words in this that are clickable, do not click the words. I haven’t completely managed to get rid of all the BoBrowser stuff yet.

I noticed that my AVG protection  had all kinds of warnings up telling me that my computer was loaded with malware and viruses, which doesn’t happen ever. I also noticed that there were tons of icons on my desktop that weren’t there before. When you open this BoBrowser, you will see that there are ad’s galore all over pages that don’t contain ad’s such as the Social Security Administration page. It will also automatically open various tabs while you’re on a page.

This new BoBrowser is apparently a virus and it seemingly installed it’s self while ridding my computer of my beloved Chrome. Be aware that if you see this on your desktop along with the many icons, you will need something strong to uninstall it. The first thing you want to do is go down to your toolbar where the clock is and close on BoBrowser and then you want to go to another browser you have on your computer, for instance you can use Internet Explorer. Go and download

and then go in through your regular control panel, click remove programs and find BoBrowser and make sure that when you click uninstall, Iobit installer opens up. Then select the program and press the green button at the bottom called Powerful uninstall. After it uninstalls the program it will say “Do you want to clean up the files left behind” press yes and then press “Shred files” then “Remove Files”. This is very important because, BoBrowser installs tons of cache’s and embeds its-self in your computer leaving behind tons of files that typical uninstallation doesn’t get rid of.

Once you have finished doing all of that, restart your computer and when your desktop reloads, make sure that it’s no longer on your desktop or in your system files.

So, this is what you should see when you open the iobit Powerful Uninstaller Program 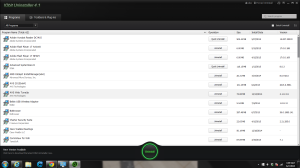 Make sure that you do not select “Create restore point before uninstalling”. You don’t want this sort of thing to remain anywhere in your computer

Next you’ll have this option which begins scanning

for any leftovers. With BoBrowser you will have left overs so once it finds them, you’ll be taken to another screen which allows you to “Select all” make sure you click the check box and that every single file left behind is checked and then press the check box that says “Shred Files” and then click “Clean up” 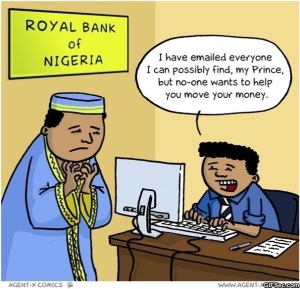 I decided to write about this because there are obviously some people who are still falling for these email scams. There’s a couple of things that people need to know about the scams from Nigeria and cat-fishers in general.

Scams like these have been going on for many years. I can remember seeing the 1st email back in 2001. Even then, I always deleted it or put it in the spam folder as most people would because, some of us are just smart enough to know that emails like that can’t be true. There are other types of scams where you might meet someone on a dating website, who happens to be from Nigeria but steals pictures from an American girl’s website and uses fake information. They will then have you sending money via Western Union and will give you a phone number to call them on, but they are likely never home. Here’s some questions you may want to ask yourself before sending money.

Those are all very important and especially researching names that they give you or pictures that they show you of their self. Seriously, you can find everything you need on Google. You don’t need to research the inheritance part because you already know it’s a scam, it’s always a scam and you won’t be an exception. The story about “I’m stuck in Nigeria and I need help”, that’s a scam! I hope this helps so many people because you need to know before, sending your hard earned money to scumbags.